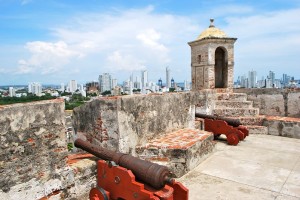 When thinking of Colombia, travelers may have been introduced to the South American country through the more populated metropolitan cities such as Bogotá, Cali or Medellín.

With so many modern cities and small towns, Colombia offers a wide variety of regions for travelers to explore. A definite must visit when traveling to Colombia is the city of Cartagena. Officially recognized as a World Heritage Site by UNESCO, Cartagena has been able to maintain its charm and picturesque appeal since the city was founded in 1533.

Take a walk in the historic Old Town that has been surrounded by a colonial wall. Encounter the Spanish influenced buildings still intact as you pass by the many restaurants, boutique “casa” hotels and retail stores. Described by locals as a “romantic city”, the setting is perfect for couples with the vibrant colorful homes in the background and horse carriage rides at night.

Take a tour inside one of the historical churches Iglesia Santo Domingo or Iglesia San Pedro Claver. Buy fresh fruit from a palenquera, you can’t miss them- women dressed in bright colorful dresses wearing containers of fruit on top of their heads.

Stop for a drink in one of the plazas in the old town, where musicians and singers will serenade to you as you enjoy the view. Home to the Cartagena International Music Festival, Cartagena Film Festival and the Hay Festival there are many reasons to visit through out the year.  Celebrate with the locals every November 11th, Independence Day when the Spanish no longer ruled over the city.

Situated on the Caribbean coast of Colombia, the majestic Islands of Rosario provide visitors with the perfect getaway. Listed as a destination in the book “100 Places Every Woman Should Go” by author Stephanie Elizondo Greist the islands are just a 45-minute boat ride away from Cartagena. Choose between a day tour that will take you to any of the 28 islands for lunch and excursions such as snorkeling, scuba diving along the coral reefs, a visit to an aquarium or jet skiing. Or for an ultra exclusive experience stay the night and wake up on your own private island.

Tip: Be sure to set aside additional money for the small harbor tax fee.

For solo travelers or groups of friends, there are plenty of activities to keep you busy. As a city with an active nightlife, there are many bars and nightclubs. Ask the locals, and they will rave to you about the famous Cafe Havana, that became internationally recognized ever since Hillary Clinton’s visit back in 2012. If you like to dance salsa, don’t miss the hot spot Tu Candela.

Another must do, is a ride on the tour bus “Chiva” a colorful and loud bus, where a live band will literally play and sing in the last row. There are two tours, one during the day that ventures around the old town of Cartagena and the modern side of the city, Bocagrande. The second tour is the “Night Rumba” aka the party bus tour. Make sure you choose which tour best suits your group, little did my mother and I know there were two different tours at the time. That was until the guide handed us a bottle of rum and Tutti Fruti soda for the ride. Going to a nightclub with my mother was definitely a first for me.