The city of Amman is one of the oldest continuously inhabited cities in the world, and as the capital of Jordan, it’s the cultural, political and business center of the country. But, even with a long and colorful history stretching back as far as the Early Bronze Age, Amman is an extremely lively and modern city.

Set atop the highest of Amman’s seven hills, the Four Seasons Hotel is the perfect sanctuary, and a great location from which to visit the nearby sights. Smaller than most Four Seasons but with all the expected amenities, the feel is quite regal. To start your day, experience a true Jordanian breakfast at the Olea restaurant. Make sure you have a large bowl of Foul, one of Jordan’s oldest and most important dishes. After touring Amman, you will find an unexpectedly lovely afternoon tea in the Lounge or unusual cocktails at the Square Bar. In the evening, dine on the terrace and experience home-style Levant cuisine.  After dinner, join other guests and try the fragrant shisha pipe while taking in the dramatic views of Amman.

Street crime is almost unheard of so don’t be afraid to take a walk and explore the area. From the moment you arrive, you will notice the Jordanian people are warm, friendly and eager to try out their English if approached with a question.

If you are interested in architecture, tour the prestigious Al Sweifiyah residential area near the hotel, where you will find interesting examples of the Middle Eastern influenced architecture in the very modern homes of the elite.

Next, head downtown and visit the ancient Citadel to explore Jordan’s long history. You will be struck by the magnificence of the towering columns of the Temple of Hercules, built between 162-166 AD. A short walk from the Temple, you will find the ruins of a tiny Byzantine church alongside a large Umayyad mosque. Wander further and you will find a spectacular Umayyad palace built in 730 AD. Whatever you do, make the time to explore the historic structures, tombs, arches, walls and stairs in this well-preserved window into the history of this unique city. 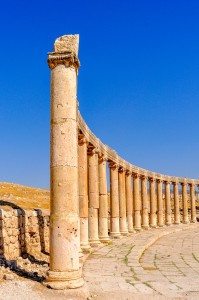 A short drive through the picturesque hills of Gilead brings you to Jerash, known as “Pompeii of the East”, one of the most well preserved Greco-Roman cities in the Middle East. There aren’t many places in the world were you can walk through ruins of a city that date back to 332 BC. Walk slowly and you will discover evidence of the many different civilizations that called Jerash home.  This site is so expansive and so complete that you may want to spend an entire day wandering, but you can easily do it in half a day. Enter through the awe-inspiring Hadrian’s Arch and explore this beautiful ancient city down the Cardo, an ancient colonnaded street that runs the length of the city, and look for chariot tracks in the stones. Make sure you visit the 3,000-seat South Theater and the unusual wide oval Forum.  As you wander, try to imagine the streets filled with the soldiers of Alexander the Great or leagues of Roman crusaders and think what life might have been like in these ancient and complex societies.

Travel southwest from Amman on the scenic King’s Highway to Madaba, the “City of Mosaics,” known for its amazing examples of Byzantine and Umayyad mosaics. The most famous is the Map of Madaba, lying on the floor of the Greek Orthodox Basillica of St. George where you will find a detailed map of Palestine in the 6th century created with over two million pieces of colored stone. The mosaic map depicts an area from Lebanon in the north to the Nile Delta in the south, from the Mediterranean Sea in the west to the Eastern Desert. Included in the map is a detailed mosaic of 6th century Jerusalem.  In other buildings, you will find exquisite mosaics of landscapes, flowers, plants, fish, exotic birds and animals; some of the mosaics portray people conducting the tasks of everyday life such as fishing, farming and hunting. Take the time to explore the hundreds of 5th through 7th century mosaics, as they are a window into what life looked like in that era. The art is spectacularly detailed but perhaps most amazing is the fact that the mosaics were installed on the floors over 1,500 years ago and were walked on daily by those who lived in the homes and prayed in the churches.

Depending on your time, you may wish to visit Mount Nebo, where Moses lived out his remaining days.  The Mount provides a panoramic view westward over the Dead Sea, the West Bank, the Jordan River and if the sky is clear, Bethlehem and Jerusalem.

Looking for something more modern, or at least less than 1,000 years old? Then Kerak Castle is just for you.

For over 3,000 years, the route from Amman to the Arabian Peninsula was traveled not only by pilgrims and merchants but also by conquering armies. At Karak, you will find one of the most impressive examples of a crusader castle. Rising out of the rock, this magnificent fortress was built by the French Crusaders in 1142. Because of its almost impregnable walls and its superb position on the King’s Highway, the castle could control all the traffic moving along the trade route and Karak grew rich by imposing a road toll.

Take a tour of the castle to discover its architectural and military genius. Walk secret passageways, a maze of underground rooms and grand vaulted hallways. See the stone beds where the soldiers slept and look out through the narrow arrow slits in the thick outer walls used to ward off attackers.

The Dead Sea, bordering Jordan to the east and Israel and Palestine on the west, is one of the most fascinating places on earth.  The surface and shores of this hyper-salinated lake lie 1,407 feet below sea level making it the lowest point on earth. 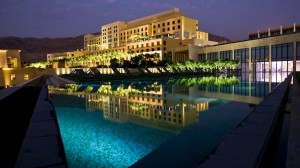 To truly enjoy the rich culture and deep history of this unique location you must stay at the Kempinski Hotel Ishtar Dead Sea. This luxury property is located on the shores of the Dead Sea and offers uninterrupted views across the famous salt lake. The hotel is architecturally modern created from sand-colored local stone, which contrasts beautifully with the lush green gardens, lagoons, and waterfalls of the property. Take advantage of the perfect oasis for some downtime; stroll on the private beach or relax with a restorative treatment in the Anantara Spa.

The Dead Sea  is one of the world’s first health resorts, believed to relieve all manner of ails, dating back to the time of Herod the Great. Today, people still come to take advantage of its curative properties. Due to the highest mineral and salt content in the world, the water of the Dead Sea is renowned for its anti-inflammatory properties and the dark mineral rich mud at its shores has been used for its many healing qualities for over 2,000 years. Bring your bathing suit and join in the fun;  coat your partner from head to toe with the pungent black muck (and visa versa) and dry yourselves in the sun. Once your muck starts to harden and crack and smiling becomes difficult, take a dip in the bathtub warm sea and bob about experiencing the unique feeling of effortlessly floating on top of the water.

“Vast, echoing and God-like” is how T.E. Lawrence (of Arabia) described Wadi Rum, or the Valley of the Moon. If you only visit one Wadi valley in Jordan, then you must visit Wadi Rum. You can trek, climb, or ride a camel, horse or jeep. You can even camp under the stars like T.E. Lawrence did with his Bedouin friends during World War I.

The most authentic way to experience this pastoral desert area is by camel and it is well worth the discomfort of the saddle. The desert is a hauntingly beautiful landscape of narrow gorges, natural rock arches, and towering red sandstone cliffs. Petroglyphs and archaeological remains give evidence of 12,000 years of human habitation. Be sure to take advantage of the Bedouin rest stop, you will find that hot tea sipped from an old jar is delightfully refreshing and will help restore your energy for the camel ride back to civilization.

Travel is as much about what you eat as what you see. In Jordan, mealtime is celebration time and every meal reflects the hospitality and generosity of the Jordanian people. You will always be served more than you can possibly eat, starting with a wide variety of mezze (appetizer) plates eaten community style, aided by dipping, dunking and scooping  Khubz (Pita). Don’t miss real Babdonsyyeh, falafel, hummus, Haloumi, Kubbeh and Labaneh Jarashyyeh. Babba ghanoush, fattoush and tabouleh. All amazing! Then make sure you have some Mansaf, the national dish of Jordan, made of lamb cooked in a sauce of fermented dried yogurt called Jameed and served with rice or Maqluba, meaning upside down, a traditional Levant dishes with layers of rice, vegetables and chicken.

Between the ancient history, the lively culture, and the large family-style meals, you will leave Jordan surprised, educated and full!