In 1932, Pablo Picasso was stood up by Swiss artist Paul Klee at the five-star Les Trois Rois in Basel, Switzerland. Despite this, Picasso stayed up all night admiring the views of the Rhine River, a drink in one hand and a cigarette in another. Picasso listened as the trams and cars stopped and Basel turned still so that the only movement in the night was the black inky river of the Rhine just below his balcony at Les Trois Rois. He was said to be inspired by the tranquility and that beautiful moment when the city came to life early in the morning.

Picasso was not the only famous guest of the historic Les Trois Rois hotel. In three and a half centuries, it has welcomed such known figures as Napoleon Bonaparte, James Joyce, Queen Elizabeth II, Empress Michiko of Japan, and even tennis star Roger Federer. It’s not hard to see why. Built along the Rhine River just next to the historic city center of Basel, the stone beauty offers an elegant atmosphere and charming historic rooms sure to satisfy even modern hotel lovers. 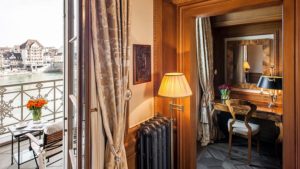 The gold printed wallpaper of the classically-decorated rooms contrasts well with the royal green or blue carpets and bed runners, while antique furniture and marble bathroom floors add that classic flair that speaks to the sophisticated and elegant nature of the property. That’s not to say that the rooms aren’t without modern amenities like Bang & Olufsen flat-screen TVs, free minibars, and the most delightful Swiss-based toiletry line, Feuerstein Essentials Switzerland.

While the hotel’s impressive historic past is reason enough to visit the hotel, these days, it’s the hotel’s three-star Michelin restaurant that attracts most guests to the doors of Les Trois Rois. Known as Cheval Blanc, the restaurant is home to Chef Peter Knogl who creatively combines French cuisine with Mediterranean and Asian influences. While a reservation at Cheval Blanc is difficult to obtain, the bar, which sits over the Rhine River and the Brassiere, serving French and Swiss cuisine, both provide equally memorable experiences during a stay.