Live theater is back in the city of Angels and what better way to spend an evening out, than by seeing the re-opening of Ovo by Cirque du Soleil! After a two-year intermission, this brilliant Cirque company is back with a recently updated show at one of Los Angeles’ top venues, LA Live’s Microsoft Theater.

Ovo, which is the Portuguese word for “egg,” is set in a colorful rainforest abounding with fantastical creatures. The audience gets a close-up view of an ecosystem in which the insects work, eat, crawl, flutter, play, fight and look for love in a non-stop riot of energy and movement. Each act has been meticulously crafted to suit each insect’s qualities and leaves the audience in awe with their display of perfect balance, inimitable strength, unbelievable flexibility, and insane heights.

One of the most beautiful acts involves a pair of butterflies in an aerial duet, flying high above the stage with only one rope each secured to their wrists. The two dance around each other, gliding and twirling in perfect unison. At some points, only one of them is holding onto the ropes, while the other suspends themselves perilously only by the connection they share, without the benefit of a safety net beneath them. The act is a graceful, passionate, and stunning show of strength and partnership between the two performers, symbolic of two butterflies finding each other and soaring together in love. 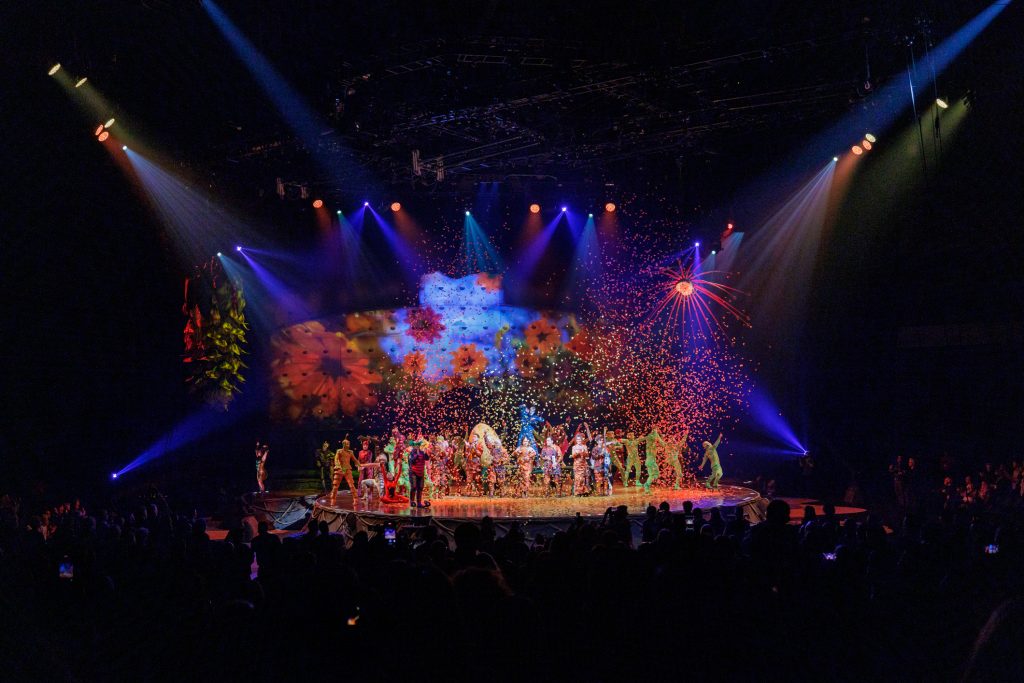 In a show of strength, balance, and flexibility, a dragonfly emerges perched on a vine-like apparatus. The routine consists of gymnastics and acrobatics, flipping and dancing all around the different vine arms of the apparatus, in a way mimicking a graceful parkour exhibit. At one point the cirque performer finally perches themselves on top in a handstand with one hand on every single post.  With the dragonfly’s extreme flexibility on full display now, he continues to contort his body so that he fully bends in half with his legs now over his head.  The next minute his lower body is completely contorted off to one side, all while holding himself up on the two posts. Unbelievably at one point, the performer is only balancing on one hand. These are the moments that make Cirque du Soliel so extremely impressive and inspiring!

The last and possibly most exhilarating act of the evening is the finale of grasshoppers, nearly 20 green-clad acrobats performing the highest level of Olympic-level tumbling passes all across the stage floor. Several of the performers on large trampolines, hurl themselves up a rock wall to the precipice that is over eight meters high.  In a sequence of coordinated moves, flipping over each other at exciting speeds, the act brings together dancing, acrobatics, and wall-climbing in an extreme show of athleticism and gravity-defying stunts.

Ovo by Cirque du Soliel, another blockbuster showcase of live human performance knocks it out of the park once again! An amazing job fitting each act and display of acrobatics with its insect character: gliding butterflies, tumbling crickets, slinking spiders, only the brilliant minds of the world’s top choreographers could bring this to life. The show is pure aerial magic, as with all Cirque shows, allowing the audience to embrace their inner child as they explore the wild world of biodiversity and the beautiful wonder of Ovo!

Ovo was written and staged by Brazilian choreographer Deborah Colker. The music, composed by Berna Ceppas, is performed live, with a single female vocalist and several featured musicians who grace the stage for special moments. A unique and imaginative soundtrack of festive folk-pop-samba-influenced music perfectly brought unison to this incredible piece of living art. Be sure to catch Ovo at LA Live’s Microsoft Theater playing until May 1, 2022. The show runs Wednesday-Friday at 8pm, Saturdays at 4pm and 8pm, and Sundays at 1pm and 5pm.  Tickets can be found at https://www.cirquedusoleil.com/usa/los-angeles/ovo/buy-tickets